Get The Perfect Filet Mignon At Your Local Texas Steakhouse

Filet Mignon is a steak cut of beef taken from the tenderloin. Texas steak fillets are some of the most tender cuts of beef available, making it highly sought after and therefore slightly more expensive. The average steer or heifer provides little more than 5-7 pounds of fillet. Because this particular muscle does not bear weight, it receives almost no exercise, making it very tender. Porterhouse and T-bone steaks are larger cuts of beef which include the fillet. The small medallion shape to one side of the bone is the actual fillet, while the longer strip to the opposite side of the bone is the strip steak, often referred to as the Porterhouse.

Bacon is used often in the preparation and cooking of the fillet. It is wrapped around the filet and pinned with a toothpick, adding flavor and keeping the fillet from becoming too dry during the cooking process. Texas Steak Filets Mignon is typically seared on each side using intense heat in quick bursts before being transferred to a lower heat source for completion of cooking. The ultimate gift: a gourmet steak dinner and chocolates to share afterwards. This combo has two of our world-famous Bacon-Wrapped Filets, with crispy bacon and fork-tender beef, and the perfect complement in our hearty Steakhouse Fries.

We took four of our most popular cuts and put them into one amazing combo! It includes our elegant Filet Mignons, classic Boneless Strips, hearty Top Sirloins and generous T-Bone Steaks. Cut from the heart of the tenderloin, our Bison Filets are incredibly juicy, tender and full of flavor. Bison is naturally lean and rich in nutrients and very high in protein, making it a great choice for the health-conscious and adventurous eaters alike. An excellent taste experience. 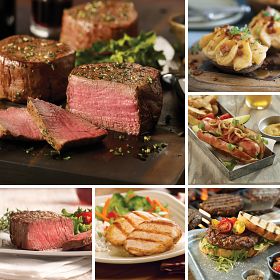 Perfect for entertaining or an incredible gift for someone special! Expertly hand-carved from the heart of the beef tenderloin, these tender, delicious steaks are sure to impress with their incredible taste and texture. 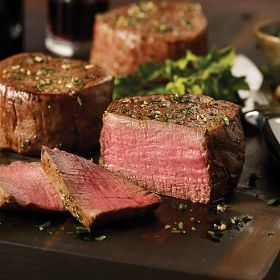